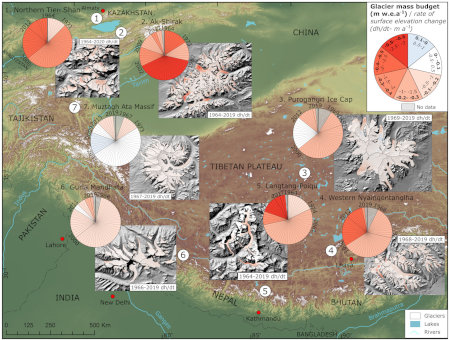 Glaciers in High Mountain Asia have been melting more quickly in recent years due to rising summer temperatures. Glacier melt prevails now even in areas where glaciers were previously growing, a team of researchers led by the University of St Andrews has concluded. Using declassified satellite images acquired by the US Corona spy satellite in the 1960s and Hexagon spy satellites in the 1970s along with several modern satellites, the glaciologists examined the behaviour of glaciers in various regions across High Mountain Asia, which includes the Himalayan region but also other major mountain ranges such as the Pamir, Tien Shan and the mountains of Tibet. The results, published in Nature Communications, have implications for future projections of ice loss from the region and raise concerns about the sustainability of the region’s glaciers as a reliable water source in decades to come.

The behaviour of glaciers provides the clearest indication of the impact of climate change in high mountain regions. The glacierised regions of High Mountain Asia are the source of some of Asia’s largest rivers, which hundreds of millions of people rely on for their basic needs. Lead author Dr Atanu Bhattacharya, of the School of Geography and Sustainable Development at the University of St Andrews, who recently moved to JIS University, Kolkata, India, said: “The results show just how much glaciers have thinned and receded since the 1960s and provide the first multitemporal record of glacier fluctuations in several regions of High Mountain Asia including the Himalaya, Tibetan Mountain Ranges, Tien Shan and Pamir over almost six decades.“

Dr Tobias Bolch, of the School of Geography and Sustainable Development at the University of St Andrews, who initiated and guided the study, said: “The rate of mass loss from glaciers across most regions of High Mountain Asia has consistently increased since the 1960s and ice loss is now occurring even in regions where glaciers had lost little mass for several decades.” The work also examined the link between glacier mass loss and the changing climate. The team combined measurements from a network of high-altitude weather stations with modelled climate data to examine the main climatic drivers of ice loss in the different regions across High Asia. Dr Kriti Mukherjee of the University of Northern British Columbia, Canada, said: “The results show that substantial increases in ice loss rates have been primarily driven by higher summer temperatures while changes in precipitation have driven the variability.”

Sorry. No data so far.